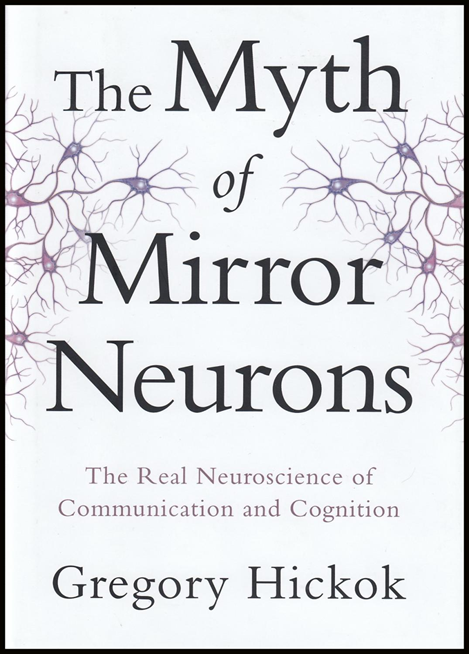 The Myth of Mirror Neurons: A Review of Hickok, 2014 (Daniel Hunter)

Thinking back, to when I first began to discover the world of neuroscience, I remember distinctly learning about the concept of mirror neurons from some popular science paperback that I picked up in a second hand bookshop in my hometown. The notion that a small bunch of neurons with one simple function – they fire both when we perform an action and when we observe the same action in others – could potentially explain a whole host of complex human behaviours: empathy, language, theory of mind, is one of the reasons I was initially so drawn to this field of academia. I suppose there is an odd comfort in believing that these historically complex problems, that have plagued brilliant minds and philosophers for centuries, may not require comparably perplexing answers after all. However… If there is one thing that I have come to realise during my studies, and particularly so since beginning my PhD, it is that – in reality – nothing is truly simple. Reflecting on this recently I decided to read a little more about this once seemingly elegant hypothesis of mirror neurons, and thought it may be a good opportunity to see what lessons I might take away from it a second time around. For the sake of nostalgia I decided to go full circle and buy another pop-science book (except this time fully-armed with university journal subscriptions for tracking down original sources). So I hope you will enjoy this short synopsis and review of The Myth of Mirror Neurons by Gregory Hickok…

The serendipitous discovery of mirror neurons by Di Pellegrino et al. (1992)1, sparked a speculative wildfire that has since permeated into several subfields of cognitive neuroscience – particularly the neurobiology of linguistics, theory of mind and action understanding.2-4 Here, we review ‘The Myth of Mirror Neurons’,5 with particular focus on Hickok’s deconstruction of mirror neuron-based theories that have not demonstrated resilience in light of subsequent experimental investigation. The suggested alternative role for mirror neurons in imitation-learning and proposed future investigations are also briefly considered.

A flawed premise that has developed the supposed involvement of mirror neurons in many diverse – and complex – cognitive challenges, is rooted in their simplicity: they fire in response to the observation of action and during action execution.1 This lead the Rizzolatti team to consider that this mechanism of internal simulation, when observing the actions of others, allows us to understand their actions – both what they are doing and why they are doing it.1,6 Hickok suggests, that this interpretation of mirror neurons as the correlate for action understanding stems from the motor theory of speech, a theory which he claims to have long since been abandoned by the linguistic community, however the author of the motor theory published a revision shortly before the discovery of mirror neurons.7 Thus, it does not seem as far a leap as Hickok suggests, that the entirety of mirror neuron theories are based on an archaic residual of linguistics in the 1950s. In fact, this speaks to a larger point that, while Hickok’s arguments are scientifically justified and compelling, at times they seem unnecessary, dismantling mirror neurons myths that simply did not exist in the scientific community (beyond known and cautious speculation).

If mirror neurons are indeed the basis of action understanding, including the action of speech as proposed by the motor theory, then this lends itself to various testable hypotheses. Namely, that damage to the mirror neuron system in humans (including Broca’s area, the homologue to mirror neuron-containing premotor cortex area F5 in macaques), will induce difficulty in both speech and language perception.5 This however, is not the case. Many studies have shown that patients with Broca’s aphasia (damage to the human mirror and linguistic-motor system) are significantly impaired in speech production but display no deficits in language perception.8,9 Although it should also be pointed out that the ability of Broca’s aphasics to comprehend language in more naturalistic circumstances (for example with background noise present), and the relative speed of their comprehension has been questioned and remains highly debated, while conveniently omitted by Hickok in this instance.10-12

Moreover, there is a more intuitive failure of the mirror neuron explanation of action and speech perception, being that we are capable of understanding action we cannot ourselves perform – and thus have no motor system to simulate. Here we consider a study in which participants are asked to categorise dog barks into contextual groups, with significantly high levels of accuracy.13 This study counters the mirror neuron based theory in two respects: (i) humans are able to infer a level of action understanding (why the dog barks, be that fear, aggression, playfulness etc.) from vocalisations that we cannot simulate in our own motor areas and (ii) an equally well performing subset of participants in this study were blind, and thus have no entrained observational experience for mirror neuron systems to employ.

This argument extends beyond that of auditory perception, into the realms of emotional cognition. Given that mirror neuron theorising has affected research regarding empathy and emotional intelligence, it is reasonable to test whether they may play a role in understanding the emotions of others.14 Again, the theory collapses. A rare congenital condition known as Moebius syndrome causes complete facial paralysis, hence a mirror neuron enthusiast would likely expect that such an individual – without the motor ability to instruct facial muscles into typical emotional conformations – would show deficits in reading the emotions of others by expression alone. However, this is not the case, those with moebius syndrome are equally capable as controls in this regard.15 Given at this point that mirror neurons have failed to explain understanding of either emotional signals or motor actions, it is sensible to re-evaluate their role in understanding, period. There is no doubt that these truly are fascinating neurons, and likely have some elegant potential applications, however we must concede that this appears not to lay in the realms of traditionally higher-level cognitive understanding.

Ironically, the proposed new direction for mirror neuron research can be identified by yet another interesting failure of these neurons to explain action understanding. Consider an experiment in which muscle evoked potentials are greater in the index finger while observing the same finger moving on another’s hand.16 Initially, this seems like long anticipated good news for mirror neuron theorists, as it shows that the observation of an action in humans likely causes some motor simulation. However, this experiment went further and found that this mirror system can dissociate the observed preference with the motor action. For example, training participants to move the little finger when observing index finger movement shifted this increase in excitability initially seen in the index to the little finger.16 Of course, one would not expect that the effect of this training caused participants to misunderstand the observed index movement as a little finger, thus action understanding is not defined by mirror systems. Instead their actions most likely reside in associative or imitation learning. Furthermore, this adaptability and learning of the mirror system has since been demonstrated to occur in macaques, becoming sensitised to the grasping actions by tools (without an associated understanding of its usefulness).17

A concluding point of note, the narrative throughout The Myth of Mirror Neurons5 should not be considered one of simple cynicism, but the scientific voice-of-reason that ought to be striven for and is required for scientific progression. The trajectory of mirror neuron research since their discovery in 19921, generally highlights the importance of speculative caution in scientific writing. Moreover, it is vital that as a research community, we can indeed celebrate discovery and recognise failures. Hence now – after exhaustive attempts to redeem what may appear as a temptingly elegant hypothesis – we must move our consorted research efforts to more promising horizons.