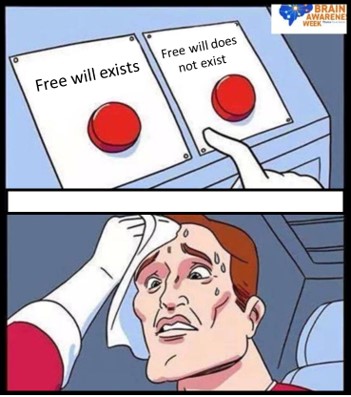 Does free will exist? (Elisa Corti)

Hi, I am Elisa and when I was asked to write a piece about something that I find interesting I chose to say “Yes!”. Perhaps.

Each of us is faced daily with choices: what to wear, what to eat, whether to answer a phone call or go to the gym. We can, to some extent, control our own actions and we can choose to wear the blue t-shirt, to prepare coffee, to pick up the phone, or to rest on the sofa when we are tired. Our lives are literally full of decisions, and we think that we are fully conscious of our choices. But is that true?

Philosophers have been debating about the existence and the meaning of “free will” since forever. The vast majority of the opinions converge on a scenario in which humans are free: free of deciding what is good and what is bad, what is important and what is not, what to fight for and what to give up on.

In 1964, two German researchers opened the Pandora’s box. Hans Helmut Kornhuber and Lüder Deecke did not agree with the widely accepted concept that the brain was just a machine able to produce thoughts and actions exclusively in response to external stimuli. To satisfy their desire of understanding how the brain can initiate an action in the absence of external stimuli, Kornhuber and Deecke invited a dozen of people and asked them to simply sit and perform a very simple task: flex the index finger whenever they wanted. The researchers were constantly recording the cerebral activity of the subjects thanks to a technique called electroencephalography (EEG), that basically consists in a cap containing various electrodes. Each electrode is able to record the activity produced by neurons underneath the electrode itself. This activity is represented as wavy linesthat resemble the movements of the financial markets. Taking a close look to such lines, the researchers realized that there was a particular pattern in the cerebral activity of the subjects (a raise followed by a sudden decay), and that this pattern usually took place half a second before the flex of the index finger. They called this Bereitschaftspotential, or readiness potential. This Bereitschaftspotential represented something that anticipates the action itself, the first measurable sign indicating that the decision of flexing the index finger has been taken. In other words, after the observation of the readiness potentials, scientists could infer that the subject would have moved the finger half a second later.

Two years later, the researcher Benjamin Libet tried to understand what was happening during this timeframe. He repeated the study of Kornhuber and Deecke, asking to the subjects to communicate the exact moment in which they decided to flex the finger. As expected, the Bereitschaftspotential appeared 500 milliseconds before the finger bending. The problem is that the subjects reported to have decided to flex the finger only 150 milliseconds before the actual flexion. There was a gap of 350 milliseconds between the onset of the Bereitschaftspotential (that indicated that an action was about to be performed) and the moment in which the decision was taken. It seemed that the brain was autonomously able to initiate an action, even before the subject was aware of that decision.

A drastic paradigm shift occurred in 2010, thanks to researcher Aaron Schurger. He was using EEG to study the spontaneous fluctuations of brain activity at rest, which depend solely on the connections between billions of neurons. Schurger thought to combine the waves obtained by single electrodes to infer the general level of activity of the brain. He obtained something that really seemed like the Bereitschaftspotential. In this case no action was about to be performed, so the researcher concluded that the readiness potential does not have the specific function of initiating an action, rather it is something correlated to spontaneous fluctuations of the cerebral activity.

Two years later, Aaron Schurger, Jacobo Sitt and Stanislas Dehane proposed a theory: when we have to choose between option A and option B, there are groups of neurons that have to evaluate pros and cons of each option. To do so, they increase or decrease their activity, respectively. If option B is better than option A, the neurons that are involved in the judgment of option A will not be very “enthusiastic”, thus they will be less active. If option A is the best one, our neurons will be very animated, thus more active. When the activity of such group of neurons overcomes a certain threshold, we are ready to choose option A over option B.

However – and this is an important however – one can argue that in the experiments of Kornhuber, Deecke and Libet the subjects did not have to make any choice, but they had to spontaneously flex a finger. In this case there are no groups of neurons involved in judging, and no options to be judged at all! So, how is it possible to reach and overcome that threshold? This is where the spontaneous oscillations of  brain activity at rest get back into the game: when, by chance, the neuronal activity is higher, it is closer to the threshold. Under this circumstance it would be easier for the subjects to decide to flex the finger. This does not mean, as Libet thought, that the brain decides for us. It rather means that these spontaneous oscillations are able to facilitate the attainment and overcoming of the threshold. This could be important if we have to take a decision in the absence of external factors on which to base ourselves.

Recently, Schurger repeated Libet’s experiment, including in the study a set of subjects that should not flex the finger. If Libet was right, namely if the brain decides autonomously when to flex the finger, the cerebral activity of people who had to flex the finger should be different from the one of people who did not have to flex the finger. This difference should pop up half a second before the flexion of the finger: in the first group of people we should see the Bereitschaftspotential, in the second case we should not.  This did not happen. Actually, the first detectable differences between the cerebral activity of the two groups appear just 150 milliseconds before the movement, when the subjects declared to feel the will of flexing the finger. So, the awareness of the decision matches the decision-making process.

Hi, I am Elisa and I do not know if I chose to write this piece anymore.